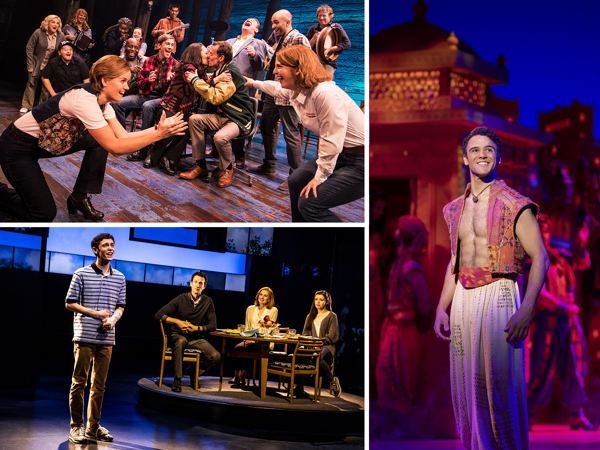 The biggest hits on the Great White Way are headed to San Antonio as part of the just-announced North Park Lexus Broadway in San Antonio 2019-2020 season!

Broadway blockbusters Come From Away, Disney’s Aladdin and Dear Evan Hansen will be part of the upcoming season. The series will also include Les Miserables, Cats, Blue Man Group, Miss Saigon and Roald Dahl’s Charlie and the Chocolate Factory.

Learn more about all of these exciting stage hits below!

LES MISERABLES
September 17 – 22
Cameron Mackintosh presents the new production of Alain Boublil and Claude-Michel Schönberg’s Tony Award-winning musical phenomenon, Les Miserables, direct from an acclaimed two-and-a-half-year return to Broadway. With its glorious new staging and dazzlingly reimagined scenery inspired by the paintings of Victor Hugo, this breathtaking new production has left both audiences and critics awestruck. Set against the backdrop of 19th-century France, Les Miserables tells an enthralling story of broken dreams and unrequited love, passion, sacrifice and redemption—a timeless testament to the survival of the human spirit. Featuring the thrilling score and beloved songs “I Dreamed A Dream,” “On My Own,” “Stars,” “Bring Him Home,” “One Day More” and many more, this epic and uplifting story has become one of the most celebrated musicals in theatrical history. Seen by more than a 130 million people in 44 countries and in 22 languages around the globe, Les Miserables is still the world’s most popular musical, breaking box office records everywhere in its 32nd year.

CATS
October 29 – November 3
Cats, the record-breaking musical spectacular by Andrew Lloyd Webber that has captivated audiences in over 30 countries and 15 languages, is now on tour across North America! Audiences and critics alike are rediscovering this beloved musical with breathtaking music, including one of the most treasured songs in musical theater—”Memory.” Winner of seven Tony Awards, including Best Musical, Cats tells the story of one magical night when an extraordinary tribe of cats gathers for its annual ball to rejoice and decide which cat will be reborn. The original score by Andrew Lloyd Webber (The Phantom of the Opera, School of Rock, Sunset Boulevard), original scenic and costume design by John Napier (Les Miserables), all-new lighting design by Natasha Katz (Disney’s Aladdin), all-new sound design by Mick Potter, new choreography by Andy Blankenbuehler (Hamilton) based on the original choreography by Gillian Lynne (The Phantom of the Opera) and direction by Trevor Nunn (Les Miserables) make this production a new Cats for a new generation!

BLUE MAN GROUP
November 22 – 24
Season Special
At Blue Man Group, you’ll rock, laugh and party. As three bald and blue men explore our world, together we’ll discover music, comedy and surprises at every turn. By the end of this spectacular journey, you’ll be saying “I don’t even know what just happened but I loooved it.” Thirty-five million people of all ages and cultures know what Blue Man Group is really about. Now it’s your turn!

DEAR EVAN HANSEN
December 17 – 22
Winner of six Tony Awards, including Best Musical! A letter that was never meant to be seen, a lie that was never meant to be told, a life he never dreamed he could have. Evan Hansen is about to get the one thing he’s always wanted: a chance to finally fit in. Dear Evan Hansen is the deeply personal and profoundly contemporary musical about life and the way we live it. Dear Evan Hansen has struck a remarkable chord with audiences and critics everywhere, including The Washington Post, who says Dear Evan Hansen is “one of the most remarkable shows in musical theatre history.” The New York Times calls it “a gut-punching, breathtaking knockout of a musical.” And NBC Nightly News declares the musical “an anthem resonating on Broadway and beyond.” Dear Evan Hansen features a book by Tony Award winner Steven Levenson, a score by Grammy, Tony and Oscar winners Benj Pasek and Justin Paul (La La Land, The Greatest Showman) and direction by four-time Tony Award nominee Michael Greif (Rent, Next to Normal).

MISS SAIGON
January 7 – 12, 2020
Experience the acclaimed new production of the legendary musical Miss Saigon! From the creators of Les Miserables, this is the epic story of a young Vietnamese woman named Kim who is orphaned by war and forced to work in a bar run by a notorious character known as the Engineer. There she meets and falls in love with an American G.I., an encounter that will change their lives forever. Featuring stunning spectacle and a sensational cast of 42 performing the soaring score, including Broadway hits like “The Heat is On in Saigon,” “The Movie in My Mind,” “Last Night of the World” and “American Dream,” this is a theatrical event you will never forget.

COME FROM AWAY
February 25 – March 1, 2020
The true story of the small town that welcomed the world. Broadway’s Come From Away has won Best Musical all across North America! The New York Times Critics’ Pick takes you into the heart of the remarkable true story of 7,000 stranded passengers and the small town in Newfoundland that welcomed them. Cultures clashed and nerves ran high, but uneasiness turned into trust, music soared into the night, and gratitude grew into enduring friendships. Don’t miss this breathtaking new musical written by Tony Award nominees Irene Sankoff and David Hein, and helmed by Tony Award-winning Best Director, Christopher Ashley. Newsweek cheers, “It takes you to a place you never want to leave!” On 9/11, the world stopped. On 9/12, their stories moved us all.

ROALD DAHL’S CHARLIE AND THE CHOCOLATE FACTORY
May 26 – 31, 2020
Roald Dahl’s amazing tale is now your golden ticket! It’s the perfect recipe for a delectable treat: songs from the original film, including “Pure Imagination,” “The Candy Man” and “I’ve Got a Golden Ticket,” alongside a toe-tapping and ear-tickling new score from the songwriters of Hairspray. Willy Wonka is opening his marvelous and mysterious chocolate factory…to a lucky few. That includes Charlie Bucket, whose bland life is about to burst with color and confection beyond his wildest dreams. He and four other golden ticket winners will embark on a mesmerizing joyride through a world of pure imagination. Now’s your chance to experience the wonders of Wonka like never before—get ready for Oompa-Loompas, incredible inventions, the great glass elevator, and more, more, more at this everlasting showstopper!

For more information about the series and the benefits of being a subscriber, click here.