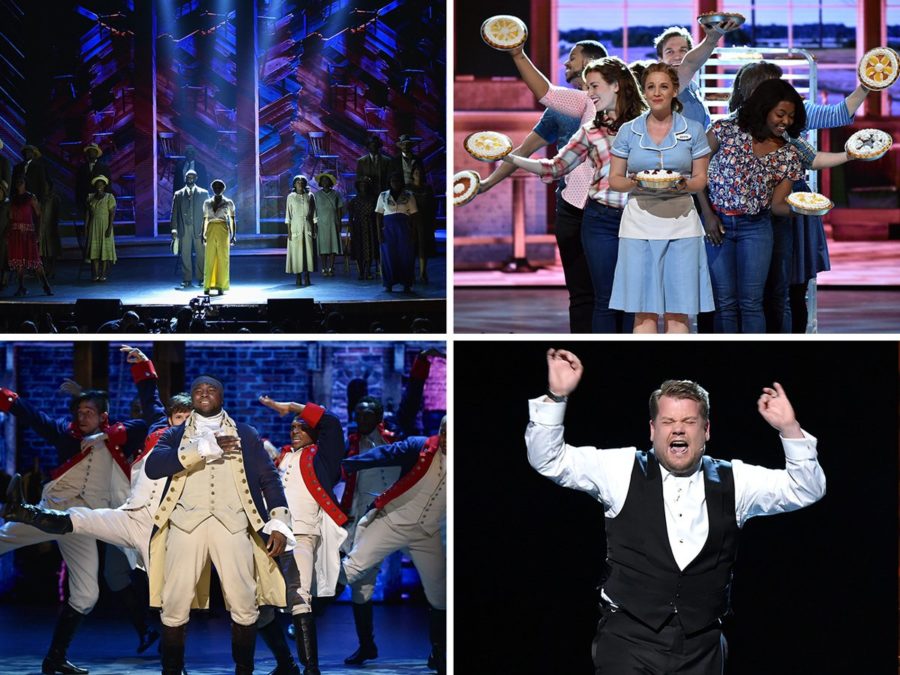 Broadway.com Breaks Down the Performances at the 2016 Tony Awards

The curtain has come down on the 2016 Tony Awards, and what a show it was! In addition to tearful speeches (and sonnets), Glenn Close as Hillary Clinton and a fan video from the Obamas, countless performers took the stage to give us a taste of what Broadway has to offer. Take a look below as we go through each of the musical performances, beginning with our top picks. Which was your favorite? Let us know in our poll!


1. THE COLOR PURPLE
"Mysterious Ways"/"I'm Here"
When most shows do a medley, there’s an ebb and flow to the energy levels to balance things out. But The Color Purple didn’t go that route: Instead, they plateaued at a high, rapturous bar from the beginning. It was great to see Danielle Brooks and Heather Headley take solos they don’t get in the show, but once the cast parted ways and Cynthia Erivo took center stage, this moment secured its spot as a memorable performance for years to come—up there with Jennifer Holliday’s “And I Am Telling You.” Few filmed performances can capture the magic of live theater, but Erivo’s voice managed to reach out beyond the Beacon Theatre rafters and through our screens.


2. WAITRESS
"Opening Up"/"She Used to Be Mine"
We’ve seen plenty of composers join their cast during the performance (including Gloria Estefan for On Your Feet! and Carole King for Beautiful,) but this was the most ingenious use of that tactic we’ve seen. Following a group performance of “Opening Up,” Sara Bareilles rolled in at the piano to slow things down with the runaway hit “She Used to Be Mine.” We were initially skeptical that Bareilles’ appearance overshadowed the actual cast, but the song’s performer transitioned beautifully from writer to star as Mueller came in to finish out the torch song with a building intensity.


3. OPENING NUMBER
This was the strongest opening number since Neil Patrick Harris and Lin-Manuel Miranda’s “Bigger.” This year’s tune, penned by David Javerbaum and Gary Barlow, wasn’t quite as catchy, but it successfully captured how uplifting the Tonys—and theater—can be. Following a Hamilton sendup (because we were always going to have one), Corden showed off his versatility by taking on a variety of roles and tunes. He also riffed on 2013’s “We were that kid” as 20 kids transformed into the 20 nominated performers from musicals. We probably could have gone without people tap dancing on Antoinette Perry’s face, though…


4. HAMILTON
"History Has Its Eyes On You"/"Battle of Yorktown"
Props to Hamilton for performing a number most audiences haven’t had the chance to see on stage yet, but we have to admit: It was not the most inclusive choice. While these two numbers were a great vehicle for nominees Lin-Manuel Miranda, Daveed Diggs and Christopher Jackson, we didn’t really get much of Leslie Odom Jr. or any of the incredible women who are such a vital part of the show. That said, the decision to go for a relatively somber moment was welcomed, and we got plenty of Schuyler Sisters once the musical won.


5. SHUFFLE ALONG
"Broadway Blues"
Shuffle Along features a stripped back design, relying on the cast’s raw energy (and sure, a quick change here and there) to captivate its audience. The subdued nature allowed the cast to showcase the musical’s most memorable component: Savion Glover’s electrifying choreography. We got plenty of tapping amidst high notes from Audra McDonald, and the opening number was a good way to introduce both the stars and—thanks to Brian Stokes Mitchell's velvety narration—the show’s intricate concept.


6. SCHOOL OF ROCK
"You're In the Band"
You also have to love a show that has some sardonic self awareness on the night of the Hamiltonys; toward the end of School of Rock’s performance, Alex Brightman (as Dewey) says, “We’re not here to win. We’re here to rock.” And rock they did. Brightman’s energy was non-stop, and you could see the kids playing off of that. Special shoutout to Evie Dolan, who was serving her signature bassist duck lips. This number, with a plethora of pint-sized rockers, was also a fitting way to follow Corden’s opener.


7. FIDDLER ON THE ROOF
"Sunrise, Sunset"/"The Bottle Dance"
Danny Burstein is the ultimate charmer, and every broadcast should feature him yidle-diddle-didling. The Tony nominee led the cast in one of the most moving scenes of the musical, starting with a subdued “Sunrise, Sunset” to contrast the upbeat wedding dance. We’re glad Hofesh Shechter’s choreography got the spotlight treatment it deserves, and the sweeping camera angles added a dynamic you can’t even get at a Broadway theater. (However, how do you do the bottle dance scene…without doing the bottle dance?)


8. SHE LOVES ME
"Ilona"/"She Loves Me"/"Ice Cream"
This medley didn’t quite have a through-line, but it was still an effective way to highlight the quartet of talented stars, starting with Jane Krakowski and a mustached Gavin Creel. If there were an award for best drop splits and floor dragging, these two would be a lock. Zachary Levi nailed the title number, and Laura Benanti’s ability to pair her soprano with comedic timing shined. This performance also managed to show off the playfulness of the revival’s box set, even digitally.


9. ON YOUR FEET!
Megamix
If your show’s songs are by Gloria and Emilio Estefan, and Gloria is game to perform on the Tonys, just let your performance slot be a full out concert. That’s exactly what happened here as Gloria and the cast delivered an energetic megamix featuring “Rhythm’s Gonna Get You,” “Conga,” “Turn the Beat Around” and more. While the show tells the story of the Estefans’ lives, this performance was pure celebration of their tunes, complete with dancing children and a rapping Josh Segarra.


10. SPRING AWAKENING
"Mama Who Bore Me"/"The Bitch of Living"
Despite the eyebrow-raising methods that got them their, we’re thrilled Spring Awakening had a chance to perform on the Tony Awards. The revival performed a medley similar to the original production’s 2007 performance, however, like the Hamilton performance, we did miss the female performers in the spotlight (though Katie Boeck and Sandra Mae Frank were once again wonderful together). But ultimately, deaf talent got the visibility it deserves, and props for the camera crew for keeping ASL in every shot.


11. BRIGHT STAR
"If You Knew My Story"
Carmen Cusack sounded superb, and we were thrilled to see her take the stage on Broadway’s biggest night to celebrate her Great White Way debut. However, “If You Knew My Story” loses its effect out of context. The song sets the mood when the tale unfolds, but viewers won’t get to hear that story here, and shots of the supporting cast, as talented and dashing as they are, don’t provide much intrigue. And unlike Estefan and Bareilles, Steve Martin and Edie Brickell taking part did not elevate what was already a solid performance.

SHOUTOUT: COMMERCIAL BUMPERS
While not full performances, we thoroughly enjoyed each and every commercial bumper outside the Beacon Theatre. It was a cute nod to Hamilton’s #Ham4Ham shows, and it was a great way to add some standards to the night from the people who made Broadway’s biggest night shine.